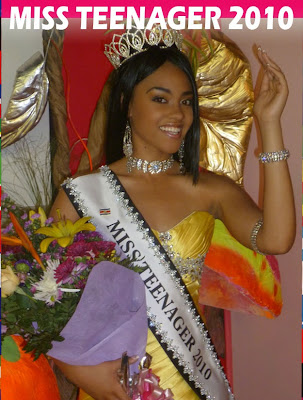 Miss Teenager Universe 2010 Chante Jantjies
Chante Jantjies from South Africa is the new Miss Teenager Universe 2010. She was crowned at the finale held October 17th in San Jose, Costa Rica. Chante Jantjies was Miss South Africa Teen 2009. Completing the semifinals were the delegates from Brazil, Canada, Costa Rica, Cuba, Slovak Republic, New Zealand and USA. Over 30 young women competed in the third annual event which is produced and organized by Next Models Guatemala.


Chante Jantjies is 16 years old and attends Lyttleton Manor High School, in Centurion. She has received full national colours for both public speaking and redenaars. She excels in Economics, Life Orientation and Business and was selected as a presenter for one of the local children’s television channels. She is also only one of two pupils selected to represent her school at the ATKV Jeug Beraad (June 2009). She won the Best Director and Best Actress awards in her House Plays Chante’ wants to study a degree in business and pursue a career in marketing, communication and advertising. Her aim is to create employment, contribute to her community and the economy of her country.